National player gets a helping hand from Chennai 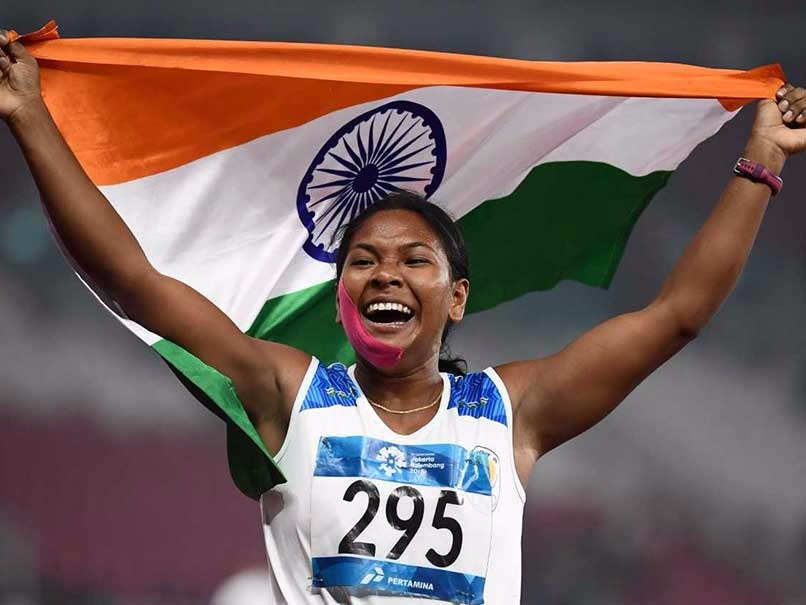 BY– S. Vishnu Sharma, INN/Chennai, @svs037
It is a shot in the arm for the Indian sports person Swapna Barman, it can be said. She is from West Bengal and made history recently by standing the first Indian Heptathelete to win a gold medal in Asian Games.
Soon after her victory she made an appeal for customised shoes that will fit her six-toed feet, happy news is that the sports person from West Bengal is likely to have those shoes, thanks to Integral Coach Factory (ICF). The prestigious institution that makes train coaches for Indian Railways is said to have begun making efforts towards providing the athelete the shoes she requires. 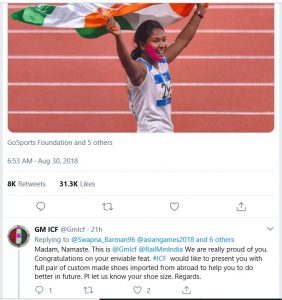 ICF is said to have opened up channels with Nike, a US based company into making shoes for sports people for getting the special shoes done. According to sources, soon after making it great in the sports event, Swapna Barman is said to have mentioned in an interview that getting a customised special shoes would help her better.
Pointing the need for customised shoes, Swapna said that
She used to get hurt while training as the generally available shoes are designed to accomodate five toes, whereas she had six toes on both the legs.
Coming to know about her request for customised shoes, ICF General Manager S Mani had instructed the officials from the Sports Branch of ICF to immediately arrange the custom made shoes and ensure they reach the famed sports person at the earliest.
Sports Branch officials have already contacted Nike for arranging supply of such special custom made shoes for Barman. As the size of her shoes needs to be ascertained, they are now in touch with the Indian High Commission officials at Jakarta and also Athlete Federation Authorities to ascertain the same.
Since the heptathlon event consists of seven different activities such as 100 meters hurdles, high jump, shot put, 200 meters running, Long jump, Javelin Throw and 800 meters running, it requires the competing athlete to use at least five different types of shoes for these 7 events. Hence, ICF will be arranging a complete set comprising of these five types of shoes, to be presented to Barman. 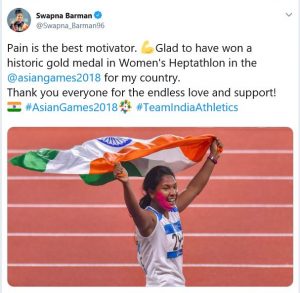 Though Barman does not belong to the broad Indian Railways Sports fraternity, as a measure of good will and in recognition of the enviable feat of Ms Barman who has brought laurels to India, ICF administration that is taking many steps to develop various sports by creating world class sports facilities in the ICF premises, is honouring her by presenting the custom made shoes for her. In addition, GM, ICF has also sent a Tweet congratulating Ms Barman and asking for her shoe size.