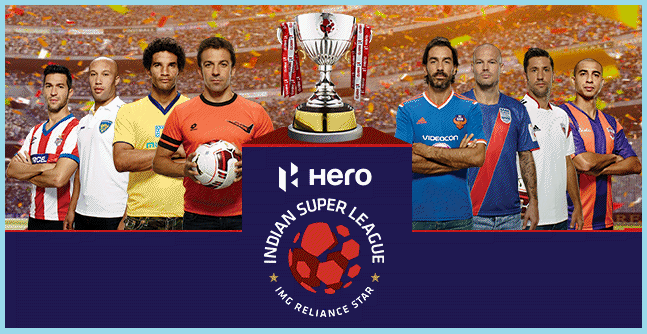 ISL has already started luring the biggest names in International football. But more than the names, it’s the spirit ‘Let’s Football’ which beckons the current generation gig time. It’s a dream which makes the boy from a small town  dribble the ball on a piece of land somewhere near his hut.

It’s the happiness which beams in every household across the rural hinterlands of India when they see their sons walking out to the ground to sing the National anthem. It’s a dream come true for the upcoming footballers to rub their shoulders with the likes of Diego Forlan, Helder Postiga, Lain Hume, Eidur Gudjohsen, Nicolas Velez and many more.
What ISL has given to India is the dynamism of the franchise model and the power  which hitherto was subdued in this otherwise cricket-crazy nation. The icing on the cake for these new born stars is the presence of  stars like Sachin Tendulkar, Saurav Ganguly, Virat Kohli, Ranbir Kapor, Abhishek Bachchan to name a few in the form of team owners.

The presence of masters of the game such as like Zico, RobertPires, Luis Garcia, Alessandro Del Piero, Roberto Carlos, DavidTrezeguet and Joan Capdevila to name a few added more feathers to ISL.

“What’s important to focus is the socio-cultural and socio-economic impact of ISL”, says L Ingti, coach of a local football team in Gauhati, the hub of North-East United FC. People are just crazy about football in this part of the country and ever since ISL started, its seems like every part of the country is just the same when it comes to loving the sport. You may be divided into teams but we are all united by the game.

There was a time when although the youngsters used to come for practice, they would also bunk rigorous training sessions. These chaps used to play the game just for some physical fitness initially bit with the advent of the ISL they are practicing like hell to compete with the best in the business.

When it comes to the socio-economic impact of ISL, Vikram Gogoi, a veteran footballer in Gauhati feels that dearth of money was an issue in the game and many opted out as they couldn’t see any future. “They used to clap and praise me when I played but back home I was always asked whether football could overcome our poverty. I had no answer and slowly decided to quit playing and started assisting my father and brother in odd job, but now things have changed, youngsters can dream big and hard work will pay off, ‘ he said.

Continuing in the same vein he said  with the coming of ISL and the way it’s going ahead, football will be the number 1 professional sport in the country and we will have 20 clubs or even more which can compete with  some of the world’s top club football leagues like the Barclays Premier League, La Liga and Bundesliga.