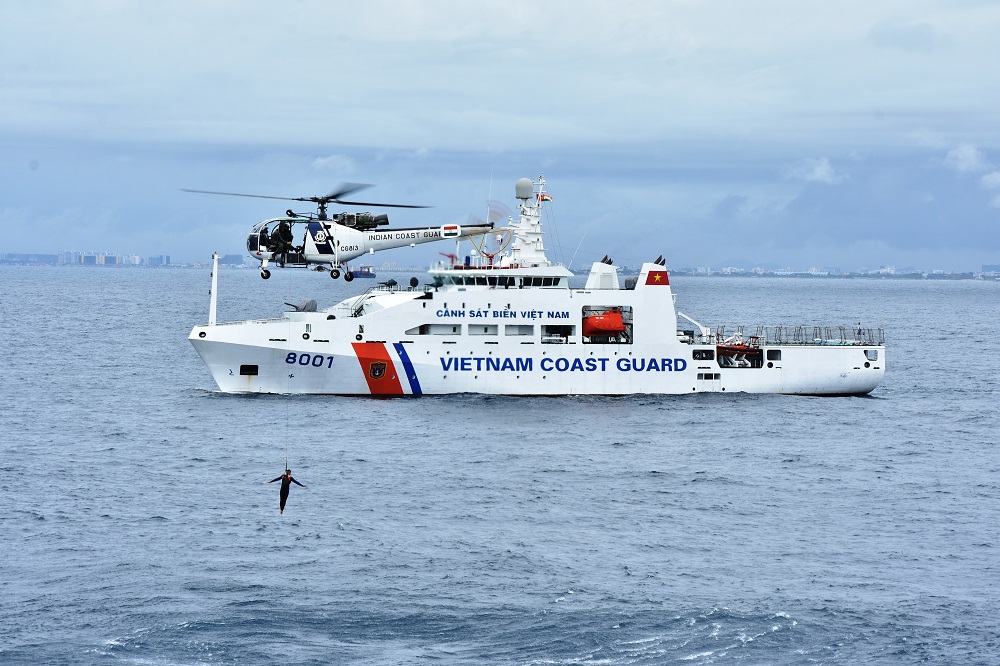 The doors for Indo-Vietnam cooperation have been thrown open and this had its reflection at Chennai coast. Offshore premises near this big city turned into a venue for conducting joint exercises by Coast Guards of India and Vietnam.

S. Vishnu Sharma, INN/Chennai, @svs037
Joint exercise ‘Sahyog-Hop Tac 2108 saw the participation of three Indian Coast Guard ships Shaurya, Arnvesh and C-431 and ICG Dornier and Chetak helicopter. Vessel of National Institute of Ocean Technology (NIOT) Sagar Manjusa also took part in the exercise.
From Vietnam, it was their Coast Guard ship CSB 8001, for it this was a maiden visit. Commander Coast Guard Region (East) welcomed the visiting Vietnamese Coast Guard Ship which traversed a distance of 3,575 nautical miles from her base port Hanoi, Vietnam to reach India.
A six member delegation headed by Commandant of Vietnam Coast Guard have also arrived Chennai for interaction with Indian Coast Guard and to witness joint exercise and participation in various events organised between the two maritime forces.
Indo-Vietnam joint exercise was with a motive to promote interoperability between the two maritime forces. While the joint exericise was a mock search and rescue operation (SAR), highlight of the exercise encompassed the scenario of the hijacking of an Oil tanker and subsequent rescue of its crew in the coordinated anti-piracy joint operation of both the countries and preventive efforts for marine environment protection.
Interdiction of Pirated vessel, coordinated joint Boarding operation SAR demonstration and external fire-fighting to salvage burning ships were the other highlights of the exercise.
The exercise culminated with an impressive steam past by the ships and fly past by the aircraft wherein the crew of the participating units saluted the visiting VCG head and Eastern Seaboard Commander on board ICGS Shaurya at sea.
The coordinated joint exercise was witnessed by Major General Nguyen Van Son, Commandant Vietnam Coast Guard in addition to Additional Director General KR Nautiyal,  Coast Guard Commander (Eastern Seaboard). The Joint exercise was conducted under the overall supervision of Inspector General Paramesh Sivamani, Commander Coast Guard Region (East),