Indian Navy gets a welcome greet from PM 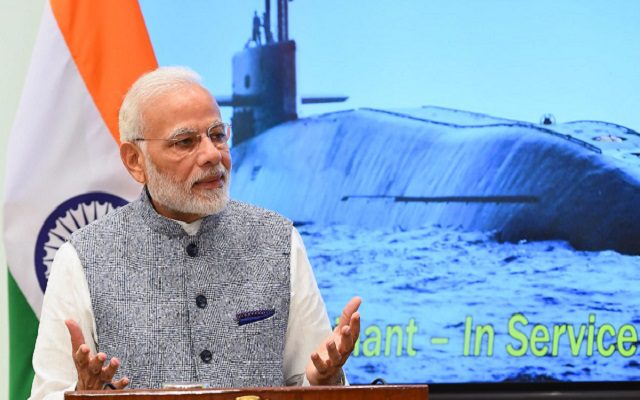 The crew were received by Prime Minister Narendra Modi on their return. Stressing the significance of the successful deployment of INS Arihant for the completion of India’s nuclear triad, Prime Minister congratulated the crew

The personnel of strategic strike nuclear submarine (SSBN) of Indian Navy ‘INS Arihant’ had a pleasant surprise in store for them soon after they returned from firts deterrence patrol completing the establishment of the country’s survivable nuclear triad.
The crew were received by Prime Minister Narendra Modi on their return. Stressing the significance of the successful deployment of INS Arihant for the completion of India’s nuclear triad, Prime Minister congratulated the crew and all involved in the achievement which puts India among a handful of countries having the capability to design, construct and operate SSBNs.
Noting that the indigenous development of the SSBN and its operationalisation attest to the country’s technological prowess and the synergy and coordination among all concerned, Prime Minister thanked them for their dedication and commitment in realising this pioneering accomplishment enhancing immensely the country’s security.
Narendra Modi commended the courage and commitment of India’s brave soldiers and the talent and perseverance of its scientists, whose untiring efforts transformed the scientific achievement of nuclear tests into establishment of an immensely complex and credible nuclear triad, and dispelled all doubts and questions about India’s capability and resolve in this regard.
The Prime Minister stated that the people of India aspire for a ‘Shaktimaan Bharat’ (Strong India) and building a New India.  They have strived tirelessly to overcome all challenges in this path.  He stressed that a strong India will fulfill the hopes and aspirations of over a billion Indians and will also be an important pillar for global peace and stability, especially in a world full of uncertainties and concerns.
He expressed the hope that just as light dispels darkness and all fear, INS Arihant will be harbinger of fearlessness for the country, said Prime Minister while extending Diwali greetings to the personnel of the submarine and their families.
It can be said that India has put in place a nuclear command and control structure, effective safety assurance architecture and strict political control, under its nuclear command authority.
It remains committed to the doctrine of Credible Minimum Deterrence and No First Use, as enshrined in the decision taken by the Cabinet Committee on Security in its meeting chaired by the then Prime Minister Atal Bihari Vajpayee on January 4, 2003.